The authors have found a new phenomenon of a winter-to-summer seasonal transport of ionospheric irregularities induced by the long-lived metallic ions between 90 and 130 km from satellite radio occultation measurements. The long-term ground-based observations from five ionosondes along the Greenwich meridian (using data from the Rutherford Appleton Laboratory, UK) and five ionosondes along 120° E (obtained by the Chinese Meridian Project, China) were analysed to try to identify the signature of the large-scale horizontal transport of metallic ions in Es layers. The mechanism proposed in this study is based on the now widely accepted wind shear theory. It explains the formation of mid-latitude Es layers through vertical ion convergence driven by vertical shears of horizontal neutral winds. By extending this original theory to three dimensions they have shown that this theory can also explain the observed seasonal anomalies. The model simulations reveal that the winter-to-summer meridional circulation transports the long-lived metal ions from the winter hemisphere to the summer hemisphere. The Fe+ ion flux is southward in January and northward in July.

This result has resolved a previously unexplained aspect of the seasonal dependence of Es layers and emphasizes the influences of atmospheric meridional circulation on the large-scale interhemispheric transport of composition in the atmosphere and ionosphere. In addition, it provides strong support for the lower thermospheric meridional circulation predicted by the model, which is difficult to measure and characterize directly because of the considerably smaller amplitudes than tides. 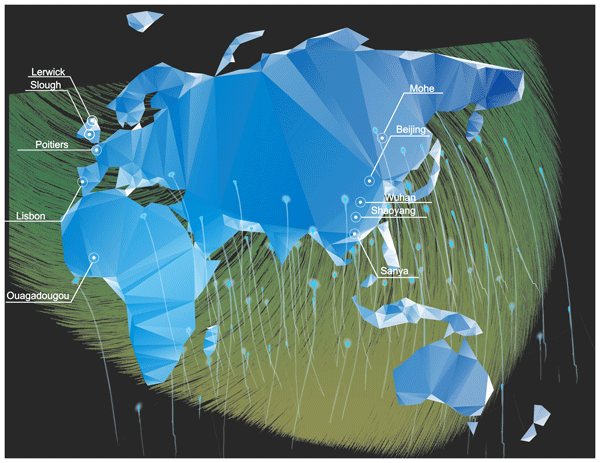